Does the IPL even deserve Harsha Bhogle (or Gavaskar)?

Harsha Bhogle is being missed.

That’s what tweeting followers and the man himself would have us believe.

While Bhogle is always entertaining, always suave, always smooth and always different from former players turned microphone wielders, the IPL  is not where he has the best impact.

It’s bizarre but while he’s missed, he’s not. There are just too many things to distract television viewers.

The BCCI, in all its wisdom, dropped Bhogle and the other wise man of Indian cricket, Sunny Gavaskar from its list of approved commentators.

While there’s been an uproar about Bhogle’s sacking , there’s been nothing said about Gavaskar’s exit. Probably because the great man was earning more—much more—than any of the other commentators and it could be explained away as a cost-cutting measure.

Bhogle’s absence, however, has the conspiracy theorists out in full force.

Bhogle got on the wrong side of Amitabh Bachchan whose tweet questioning the nationalistic credentials of Indian commentators was enthusiastically endorsed by Mahendra Singh Dhoni.

And Bhogle’s comments during India games have ired the Indian dressing room.

These speculations would have been more believable had N Srinivasan still been heading the BCCI. Dhoni was purportedly his blue-eyed boy.

But those days are past or aren’t they?

And why is it that the BCCI still decides who should commentate on India games?

Can their ‘employees’ really provide unbiased views about their paymasters? That’s hardly credible much as Ravi Shastri and his ilk might protest otherwise.

It would be best if broadcasters were to select and pay cricket experts themselves.

Why have cricket boards have any say in the matter?

Viewers, too, shouldn’t have to second-guess the experts.

Sunny Gavaskar: What he said, really meant and definitely didn’t

Sunil Gavaskar lights up the Melbourne night with his remarks.

“He (Virat Kohli) can even bat at midnight without light and still bat well.  …

Rohit kills you with tickle and Kohli can punch you to death. Either way you are going to die.”

The original Little Master switched on his eulogistic side when Team India clinched the T20 series against Australia at Melbourne on Friday evening.

“He is setting the bar higher for the future players. He is in fantastic form… form which the players dream about. he can even bat at midnight without light and still bat well. The Australians cant get him out. They will have to wait for him to commit a mistake.

I would not bowl to both of them. Rohit kills you with tickle and Kohli can punch you to death. Either way you are going to die.

I want to see India win the series 3-0. Kohli should continue to bat at number three. Never ever flirt with form, it’s so fickle, don’t flirt with it. Yuvraj can bat during the Asia Cup, World Twenty20. Let India make a clean sweep.

He (Dhoni) has got now Yuvraj, Ashish Nehra, Hardik Pandya in the side. He has plenty of bowling and batting options. It has eased off the pressure on him. Bhajji (Harbhajan Sigh) is sitting on the bench which means it is a very good selection. The balance is terrific. Pandya can bat at number seven and can bowl. Even if a bowler is hammered around, Dhoni can go to the other bowler.

The Aussies were under pressure and it was a good omen for the Indians for the World Twenty20.”

“Kohli’s batting like a dream. If you’re a day-dreaming bowler, dreaming of bagging either or both , Rohit will tickle you out of any such fancy ideas while Kohli will match you, blow for blow. Either way, it’s death by panache.”

“Tickle me pink, I wonder if these two guys would love day-night Test cricket!” 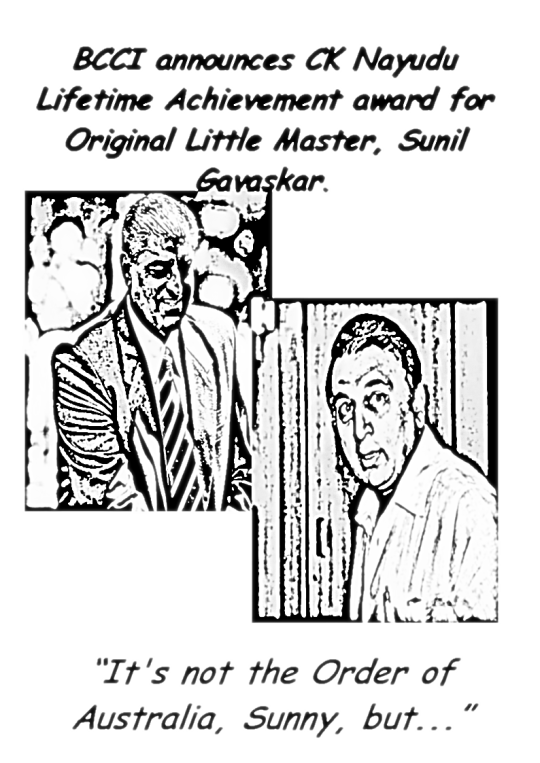 Sunil Gavaskar will concede nothing to the current World Cup winning squad.

“Sandeep Patil featured in a full-length Bollywood movie. Can any of you guys (with multiple dance show appearances) boast of anything remotely close?”

“That’s because Kapil shared his Palmolive with us all; we were always clean-shaven.”

Sunil Gavaskar is conversant with the quirky ways of Indian selectors. The former Indian opener was speculating on who would replace Rohit Sharma in the Indian line-up following his finger injury in the first ODI against England at Durham.

“RP Singh’s no use. Get another seamer in and quick.”

“’Oranges for oranges, apples for apples’: That’s our selectors’ motto.”

The rout is complete.

The English Lions, in their own den, knocked the Indians from their perch of the No.1 Test team in the world.

Team India nestle at No.3 behind South Africa.

For one brief session on the fifth day of the last Test, Sachin Tendulkar and Amit Mishra showed what could have been. Had the Indian batsmen applied themselves similarly in the first three matches, the series result could have been quite different.This was the only batting session—in the entire series—that the Indians did not lose a wicket.

The English bowlers, for the first time in the series, showed signs of frustration. Graeme Swann kicked the turf, repeatedly.

END_OF_DOCUMENT_TOKEN_TO_BE_REPLACED

That’s what the Good Book states.

An article in Outlook India highlighted the inherent conflict of interest in the job profiles of Sunil Gavaskar and Ravi Shastri when they (supposedly) provide unbiased, expert comments on games involving India while at the same time they are contracted directly to the Board for Cricket Control in India (BCCI).

END_OF_DOCUMENT_TOKEN_TO_BE_REPLACED

Santosh Desai: What he said, really meant and definitely did not

“The BCCI is a banana republic, it answers to no regulatory body.”

Santosh Desai, a social commentator, is under no illusions about how the BCCI conducts business. He was commenting on the conflict of interest inherent in Sunil Gavaskar and Ravi Shastri contracted to the  BCCI while offering their opinions for Sky Television.

“The BCCI is a banana republic; working with it is akin to trying to retain one’s balance while treading a banana skin.”

“Sunil Gavaskar and Ravi Shastri endorse plantains for the BCCI.”

“Why should they speak out against the board? Will a Congress leader speak against his party in Parliament?”

Kapil Dev makes his opinion known as to whether Sunil Gavaskar and Ravi Shastri can be unbiased with their statements in the press box while being simultaneously indentured to the BCCI and providing expert views for Sky Sports.

“The BCCI functions like a (Indian) political party. Either you toe the party line or you’re out.”

“Are there any vacant slots for me, in that box?”